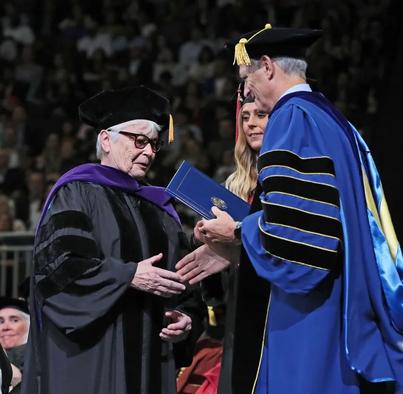 On May 19, Sr. Ann M Durst, SHCJ, Esq. Founder of Casa Cornelia Law Center, was awarded an honorary Doctor of Law degree from Marquette University in recognition of her life’s work of service.

A member of the Society of the Holy Child Jesus since 1955, Sister Ann earned her master’s degree in theology from Marquette in 1971 and served as president of Rosemont College in Rosemont, Pennsylvania until 1978. It was at that point that she attended law school, graduating from Georgetown in 1982. She then began her legal career as senior counsel for the Pennsylvania State System of Higher Education. Later in 1993, she founded Casa Cornelia Law Center at the request of the American Provincial of the Society of the Holy Child Jesus. Since then, the law center has provided pro bono legal services for hundreds of asylum seekers, abused and abandoned children, and victims of domestic violence.

Congratulations, Sr. Ann!  We are forever grateful for your vision, leadership, and quest for justice with compassion.  A true committed life of faith and action!  We are honored to be part of your legacy. Make a donation today to sustain the mission of Casa Cornelia Law Center founded by Sr. Ann Durst, SHCJ, and help ensure her legacy of hope and access to justice endures.

Thank you for your support!