Diogo and Antonio were recently granted asylum in the U.S. They escaped persecution based on their membership in the LGBTQ community and HIV positive status. After ongoing harassment and increased violent and fatal attacks on gay, transgender, and lesbian individuals in their country of origin, they traveled to the U.S. and applied for a humanitarian protection. 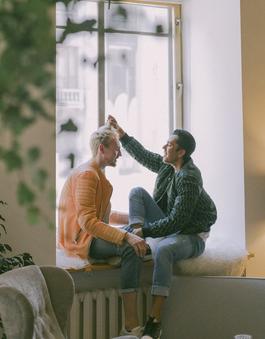 ​
Living in a conservative South American country, Diogo* experienced frequent bullying from his peers due to his sexual orientation and sensitive personality. Despite this, Diogo continued pursuing his education and built a successful career in a professional industry. In 2011, Diogo met his partner Antonio* with whom he has had a relationship ever since.

In 2013, Diogo and Antonio learned they were HIV positive. Antonio was later diagnosed with a form of cancer and began chemotherapy, which made him sick and caused him to miss days from work. The medications continued to take a toll on Antonio’s health. He informed his employer of his HIV status to explain his frequent absences, which led him to experience harassment in an already hostile, prejudiced, and homophobic environment. Eventually, Antonio had to take a long-term disability leave from his position. He fell into a severe depression, eventually becoming suicidal. He spent long periods without bathing or eating, and withdrew from family and friends. Fearful for his partner’s physical and mental stability, Diogo became his fulltime caretaker, and even left his longtime professional position.

Antonio began to improve, so Diogo and Antonio traveled to the U.S. and arrived to California with a tourist visa. Shortly after, general elections were held in their country, and the President elect made open violent statements against the LGBTQ community. Violent and fatal attacks on gay, transgender, and lesbian individuals increased dramatically. Afraid for their life, Diogo and Antonio decided to remain in San Diego.

Under the guidance of Senior Litigation Attorney Arwa Kakavand, Volunteer Attorney Carin Ricci Pereira, Managing Attorney at Ricci Law, took Diogo and Antonio’s case and applied for asylum on their behalf under the basis of fear of future persecution, as members of a particular social group: gay men with HIV positive status. The case was strong and both Diogo and Antonio were granted asylum. They are now waiting for work permits so they can start their new and safe life together.

Casa Cornelia Law Center is incredibly grateful to everyone who contributed to the success of this case. Thank you for your time, energy, and expertise in saving lives!

* Names have been changed to protect confidentiality.