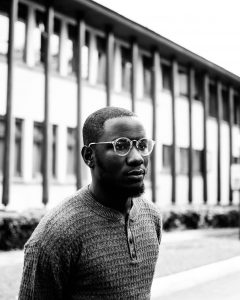 For the past few years, the English-speaking region of Cameroon has experienced violent conflict with the French-speaking government military.

Both sides of this fight have committed many human rights abuses and put innocent people in the cross-hairs. It is in this environment that a small convenience store owner named Kwamba* was raising his children.

As a child himself, Kwamba had already experienced the consequences of this conflict. His close family member was tortured to death for being a member of the English-speaking opposition party. At just ten years old, Kwamba was forced to drop out of school and begin working to support his family. He made a living for himself in Cameroon repairing bicycles, driving taxis, and later working for a company.

Many years later, as owner of a convenience store and with a family of his own, Kwamba had much to lose.

One day, his neighborhood was a target for a series of raids by government officials. They burnt down his store and arrested him. Kwamba says, “I tried to escape but they captured me and many other younger males from my town, and locked about 20 of us up.” He endured more than two weeks of imprisonment and torture at the hands of the military, who was convinced he was a member of the English-speaking resistance. Kwamba was beaten and interrogated every morning. He says, “The conditions were horrible… we saw the light only when we were sent out to clean their toilets and bathrooms.” If Kwamba didn’t escape soon, he feared he would die there like his family member had.

An opportunity arose when the prison camp came under attack. With the guards occupied, Kwamba made a run for it towards the forest. There he hid for months – just barely surviving – before finally taking the risk of returning home. But it was even more dangerous than before. When he arrived, someone warned him that the military was regularly searching their village with arrest warrants, including Kwamba’s. Desperately afraid of being recaptured, Kwamba fled the country. He made it to a nearby African country, where he was treated at a clinic for malaria. There, he met a sympathetic nurse who was able to find him passage to South America.

Kwamba says, “From Ecuador, I continued by land, bus, boat, and through the jungle, up Central America until finally reaching the U.S. border.”

He claimed asylum, hoping to find safety in this country. But, having used all his money to flee Cameroon, Kwamba found himself unable to afford an attorney to help him with his case. Thankfully, someone referred him to Casa Cornelia, where Volunteer Attorney Jonathan DeSimone took on his case. Jonathan argued for Kwamba’s claim to asylum in court, and won the case at the close of 2019! Kwamba now has access to vital protections under U.S. law that allow him to live here free from the fear and persecution he endured in his home country. He starts the New Year more hopeful than ever for the possibilities his future holds.

To learn more about the work of our Asylum Program, click here or read more of our Featured Stories.